Write the vision and make it plain on tablets, that he may run who reads it. For the vision is yet for an appointed time; But at the end it will speak, and it will not lie. Though it tarries, wait for it; Because it will surely come, it will not tarry. (Hab 2:2-3)

As far back as I can recall, I have had a vision board. I use a cork board or a dry erase board, and put on it the things I was believing God for that year. I added pictures, scriptures, whatever I felt led of the Lord to add and throughout the year I prayed over those things I had put before my eyes. I knew it was vital to keep these things before my eyes – it was my faith in action. I can’t even count the number of things I have seen come to pass by this simple expression of my faith.

Like I said, I have had a vision board as long as I can remember, every single year – until last year.

I don’t really know why I didn’t last year. 2020 was hard, 2021 was difficult with much loss and 2022 started out bad, I just didn’t make one. I thought about it a couple times through the year, but it seemed I was constantly dealing with something and simply didn’t get around to it.

A few days before Christmas, Kelita shared something she had on her vision board from three years ago that was now coming to pass. (On her board she had put that it would happen in the next three years)

Since that conversation, I have not been able to get a vision board off my mind. I felt as if God was urging me to once again, make a vision board. He kept taking me to the scriptures found in Matthew 5.

Matthew 5:1-8 says, So it was, as the multitude pressed about Him to hear the word of God, that He stood by the Lake of Gennesaret, and saw two boats standing by the lake; but the fishermen had gone from them and were washing their nets. Then He got into one of the boats, which was Simon’s, and asked him to put out a little from the land. And He sat down and taught the multitudes from the boat. When He had stopped speaking, He said to Simon, “Launch out into the deep and let down your nets for a catch.” But Simon answered and said to Him, “Master, we have toiled all night and caught nothing; nevertheless, at Your word I will let down the net.” And when they had done this, they caught a great number of fish, and their net was breaking. So they signaled to their partners in the other boat to come and help them. And they came and filled both the boats, so that they began to sink. When Simon Peter saw it, he fell down at Jesus’ knees, saying, “Depart from me, for I am a sinful man, O Lord!” 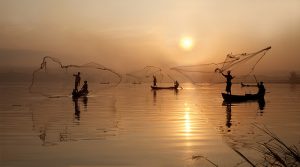 I felt much like Peter, “Lord, I have toiled over these things long enough.” I also felt like Peter when he said, “Nevertheless, at thy word, I will cast my net one more time.”

I know many of you understand exactly how I feel. There are things you have believed God for, literally for years, and have yet to see them come to pass. Yet, there is something deep inside of you that will not – that cannot – let them go. If that is you, I believe we are in the “cast your net one more time” season.

I believe it is time to dust off those dreams and visions and get them back out. Put them before your eyes. Find scripture to confirm what you are believing God for and then purpose in your heart to pursue His plan and His promises this year.

It’s time to launch out into the deep one more time – into the deep things of God.  Into the place of hoping against hope and believing when you cannot see.

What is your dream? What promise do you feel God has made you that you have yet to see with your eyes? Whatever it is, it’s time to launch out and lay hold of it. God’s Word has the power within itself to come to pass. He never goes back on His Word. If He said it, He will do it. Our part is to do like Abraham and believe God. Hope against hope. Continue to stand until we see the fulfillment of it. My friend, it is not time to lay down our sword, it is, however, time to pick up our vision and run with it. Amen? Amen!