Developing a Faith that Touches God

I have been meditating on this scripture for a few weeks.  It is found in Luke 8:44-46.

She came up behind Jesus and touched the fringe of His cloak, and immediately her bleeding stopped. “Who touched Me?” Jesus asked. But they all denied it. “Master,” said Peter, “the people are crowding and pressing against You.” But Jesus declared, “Someone touched Me, for I know that power has gone out from Me.”

Jesus was surrounded by a multitude of people, literally thousands of people. Yet the moment someone touched Him with their faith, He knew it.

The disciples even asked Jesus how He could possibly know that someone touched Him with so many people surrounding Him and pressing in to touch Him.

This was a different kind of touch; this was not a simple bumping into in a crowd. This touch caused the miracle working power of God to flow out of Jesus. He knew it the moment it happened.

How, then, does one possess a faith that will touch God to the point that power will flow out of Him and into you? Let’s look at some biblical examples of this kind of faith. A faith that touches God. 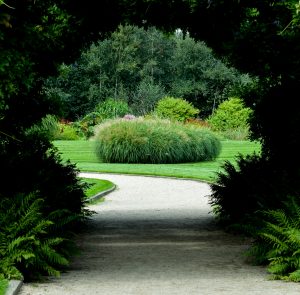 The word touched in this passage means to fasten oneself to or adhere to. That’s what the woman with the issue of blood did when she touched Him. She clung to Him in such a way that virtue or the miraculous power of God flowed out of Him.

That is exactly what David did. No matter what mistake he made, he ran to God. He did not run from God when he messed up, as many of us do, he ran to Him. Even when he knew he was under the judgment of God for his sin, still he clung to God. When he was afraid, it was God he ran to. When he was rejoicing in victory it was God he sang to. And in doing so, he touched God with his faith.

What about Abraham? Abraham obeyed God and left his home. He traveled to a land that God would show him. He did something many of us would not be willing to do. He packed up and left everything behind and followed God. And if that wasn’t enough, God blessed him with a son of promise, and then God asked him to give him up. Abraham was willing to do just as God asked. He touched God with his faith and a ram in the thicket was released on his behalf.

What about Shadrach, Meshach and Abednego? Their faith in God brought them before a king who threw them in the fiery furnace. In anger that king turned the furnace up seven times hotter. Yet, they stood firm in their faith and walked into that fire. Their faith touched God and He sent a fourth man to walk through the fire with them. They, as we know, walked out unharmed. As their faith touched the heart of God, the smoke couldn’t even touch them.

Each time someone’s faith touches God, power is released on their behalf.

Luke 8:45 said multitudes were thronging Him. That means there were literally thousands of people all around Him. Let me ask you a question today; are you one of the throngers or do you desire to be one of those who touch Him with your faith? There are many people who say they are following God, but few ever touch Him with their faith.

How do you become a person who not only follows God but touches Him with your faith?  Simple, you believe that He is who He said He is. Just as the woman with the issue of blood did.

Abraham so believed that God was who He said He was that he knew if his son, Isaac, died God would raise him up. That’s how Abraham could confidently say, “we are going to worship, and we shall come again.”

Shadrach, Meshach, and Abednego knew that God was the only God that could be worshipped.  They were willing to die for that truth. They were not willing to bow to any other god. Even though they knew God could deliver them, they declared that even if He didn’t, they would not bow to another.

This instance alone is a good test for your faith in God.  If God doesn’t deliver you, will you still worship Him? If you can say YES then you, as they did, will touch God with your faith.  He will be with you in the fire. He will not allow you to be burned and He will bring you out without experiencing harm.

There are many people who are alive today who touch God with their faith. I think about Oral Roberts who believed God when everything was stacked against him. He stood in faith even though most of the world thought he was crazy. But today, you can look and see what happened when his faith touched Jesus, ORU was birthed, and they are still equipping students today to preach the gospel with power.

Think about it for a moment, I am sure you know someone who has stood against all odds, perhaps it was against cancer or divorce, or financial devastation. They stood in faith and even though it may have looked like they were going down or had already gone down, their faith touched God. He moved every obstacle out of their way and sent His miracle working power to work on their behalf.

How can your faith touch God? The same way the woman with the issue of blood did.

She pressed in; she was determined to touch Him, even a small part of Him. She was determined to touch the Healer, even though every doctor had told her it was hopeless. Even though she had spent every penny she had trying to get healed. Even though her mind was reminding her of all this, she pressed on. She determined that no matter how many obstacles stood in her way, she would touch the Healer! As she did, and she was not only healed but made whole that very hour.

When all hell has come against you and you stand in the face of it and declare, “devil, I don’t care what you throw at me, I am going to trust my God and I am going to worship Him no matter what.” Your faith is touching God.

As your faith touches God, He will release His awesome miracle working power on your behalf and move heaven and earth to get to you. He loves you that much!  He wants to bless you that much!  You mean that much to Him. Don’t give up, my friend. Press on in. Push your way in if you must but press in and touch Him. Touch Him with your faith, you will be forever changed.