Do Not Waver or Draw Back

Recently a close friend of mine has been at a place of transition. In our conversations she has shared with me her feelings on making this change, which would be a huge step of faith for her.  it seems each time she gets to a place of complete peace about her move, something happens, or someone calls to go over all the negative aspects of her moving forward. At times, this has caused her to question her move. This morning was such a time.

As I listened to her talk, one scripture came to mind.

But let him ask in faith, with no doubting, for he who doubts is like a wave of the sea driven and tossed by the wind. For let not that man suppose that he will receive anything from the Lord. James 1:7

Let’s look at it in the Passion Translation.

Just make sure you ask empowered by confident faith without doubting that you will receive. For the ambivalent person believes one minute and doubts the next. Being undecided makes you become like the rough seas driven and tossed by the wind. You’re up one minute and tossed down the next. When you are half-hearted and wavering, it leaves you unstable. Can you really expect to receive anything from the Lord when you’re in that condition?

As I meditated on this scripture, I remembered Lot’s wife…

The Bible says God had come to deliver Lot and his wife before destroying Sodom and Gomorrah. On the way out, instead of moving forward, Lots wife looked back. In doing so she turned to salt and never moved forward again. 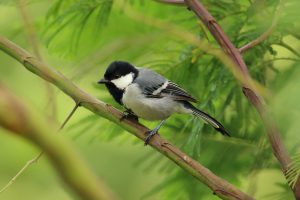 This is a day to make certain we are empowered by confident faith in God and His Word. Furthermore, we must stand in faith, declaring His Word, without doubt. Regardless of what comes our way. We cannot afford to shrink back.

For many, the enemy is working overtime to attack and hinder the promises of God. I I have had more challenges this year than I have had in a long time.  Unexpected expenses cropping up and medical issues I have never faced. However, these things are not causing doubt to come concerning the Word or the promises of God. Frankly, it is having the opposite effect. I am more convinced than ever that we are stepping into the new. I am absolutely certain the wonderful promises God has made us are coming to pass in this season – we will see them with our eyes. With each passing day I become more certain.

Why? Because I am spending more and more time in the Word of God and in prayer. These challenges are not causing me to shrink back but to draw near – and that is one of the keys to stepping into the new. We must keep our faith strong. We do that by drawing nearer to God.

We must also refuse to back up when it comes to our finances. I have noticed in the past couple weeks; many are being attacked in their finances and their first instinct is to draw back. I’m not the only one seeing this – I heard a minister say over the weekend that it was more important than ever to sow in this season of famine. He said he would give up eating out and many other privileges before he would stop giving. I absolutely agree – I would do the same. I have done the same.

I am reminded of Isaac. He sowed in the land of famine and reaped a hundred-fold. Let’s look at that story.

There was a famine in the land, besides the first famine that was in the days of Abraham. And Isaac went to Abimelech king of the Philistines, in Gerar. Then the Lord appeared to him and said: “Do not go down to Egypt; live in the land of which I shall tell you. Dwell in this land, and I will be with you and bless you; for to you and your descendants I give all these lands, and I will perform the oath which I swore to Abraham your father. And I will make your descendants multiply as the stars of heaven; I will give to your descendants all these lands; and in your seed all the nations of the earth shall be blessed; because Abraham obeyed My voice and kept My charge, My commandments, My statutes, and My laws…” Genesis 26:1-5

Then Isaac sowed in that land and reaped in the same year a hundredfold; and the Lord blessed him. The man began to prosper and continued prospering until he became very prosperous; for he had possessions of flocks and possessions of herds and a great number of servants. Genesis 26:12-14

Isaac obeyed God and His Word. Even when it looked like he was about to endure famine. He had a family to care for, it couldn’t have been easy. Still, God told him to stand still, be at peace and continue obeying God’s commands.

What did he do? God told him he would bless him and his seed, so he sowed. He sowed and he sowed, in the land of famine. At the time when it appeared nothing could possibly grow. It was in that time that he received a hundred-fold return. God is no respecter of persons – if He did it for Isaac, and He did, He will do the same for you in famine. His blessing is on your seed. Never forget that. Declare it when you sow your seed. Declare His blessing is on it and just as He did for Isaac, He is causing you to reap a hundred-fold return in this very season.

Friends, we are in a wonderful season. A time of transition. A time of stepping into the new things God has for us. Yes, there is opposition, but we are not fighting for victory, we already have victory. We battle from a place of victory.  We must remember that and keep pressing forward, refusing to waver or look back. Refuse to become unstable. Refuse to let go of His Word and His promises. Refuse to stop giving. It’s time to lay hold of all God has for us, it is ours for the taking – let’s take it together!

Occupy Til He Comes

Just this week, my daughter and I were sitting in front of o

You Have Been Found