Today I was thinking about my granddaughter and when she first learned to ride her bicycle without training wheels.

Finally, the night before, she had ridden her bike for the first time without training wheels! She was so excited. So much so, she giggled the entire time she was riding. It was the cutest thing to watch!

She was loving her new freedom and wanted to try something even more difficult.

She wanted to try to ride her bike while carrying a bucket. This, of course, did not work. She quickly got frustrated and began to complain. In her frustration she began to ride her bike back to her house in anger. In doing so, she almost ran into a vehicle.

As soon as that happened, her dad said to her, “Brailee, you are going to crash if you drive with that attitude!”

When I heard those words, it jumped in my spirit. You are going to crash if you drive with that attitude!

Wow! What a profound truth! Anger will cause us to crash every single time.
Eccl. 7:9 says, do not hasten in your spirit to be angry, for anger rests in the bosom of fools.

Psalm 37:8 says, cease from anger and forsake wrath; Do not fret—it only causes harm.

Do not fret. It only causes harm. There will be absolutely no good fruit found in anything done in anger.

I’m not saying you will never be angry. We are all angry at one time or another. But we cannot afford to remain angry…if we do, we will crash. And we must not respond in anger. So, what do we do? 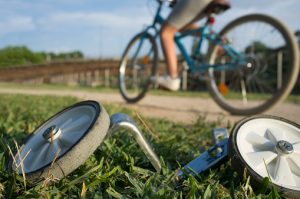 Psalm 4:4 says, Be angry, and do not sin. Meditate within your heart on your bed and be still. Selah

When anger comes, and it will, stop and be still. Meditate in your heart. Allow God to speak His Word and His way to your heart…be still until He does. Refuse to respond in anger. Determine you will only respond in peace.

Philippians 2:5 says we should have the same attitude that Jesus Christ has. What attitude is that? Well, we find it in Galatians 5.

But the fruit of the Spirit is love, joy, peace, forbearance, kindness, goodness, faithfulness, gentleness, and self-control.

I witnessed a true example of this last week. I saw a minister publicly attacked by another minister. The response of the one who was attacked was astounding. It was the pure love and forgiveness of God. From a sincere heart.

It convicted me and caused me to want to love better – to forgive quicker. I thought about the saying that went around several years ago; what would Jesus do. This minister did, in my opinion, exactly what Jesus would do, and it was indeed a great inspiration to me. Oh, that we could all handle attacks from people in such a manner. The Word of God says they will know us by our love.

May the love of God shine through us daily just as it did through this minister.

Love, joy, peace, patience, kindness, goodness, faithfulness, gentleness, and self-control…let those attitudes dwell in you today. Refuse to crash…let His mind and His love remain in you…at all times. Resist anger – refuse to react in anger – thereby avoiding crashes. Let the whole world come to know you by the love of God in you which oozes out of you. May we all love better and forgive quicker.