We are all guilty of it. Thanksgiving morning arrived and we are busy preparing the turkey, mashed potatoes, and homemade bread. The family is running around chattering with excitement. The house is filled with wonderful aromas and joy. It’s a great time with family and friends. The day quickly passes, and we move on. Our days now filled with black Friday sales and preparing for Christmas. But is this how this yearly Thanksgiving began? Is that really all there is to it? Has the giving of thanks become lost in the busyness of the season?

When the Pilgrims landed at Plymouth after a grueling journey in the 1600’s, they had no idea they would set a pattern in motion that would last for many years to come.

In his book, “Of Plymouth Plantation,” William Bradford wrote concerning their arrival,..

“Being thus arrived in a good harbor and brought safe to land, they fell upon their knees and blessed the God of heaven, who had brought them over the vast and furious ocean and delivered them from all the perils and miseries thereof, again to set their feet on the firm and stable earth, their proper element. And no marvel if they were thus joyful.”

Their very first action after a long and challenging journey was to fall on their knees and thank God. As the story goes, sixteen men were sent out on that icy November day to locate firewood. Yet, firewood is not all they found. They also discovered a cache of corn buried in an old iron pot. This would be the food that would ultimately save their lives that winter. It reminds me of the ram caught in the thicket in the days of Abraham and Isaac. 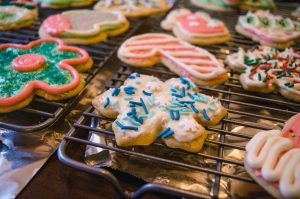 The following fall they harvested a bounty worthy of celebration. They shared that bounty with those around them, including the Indians. Thus, Thanksgiving Day was birthed.

The story doesn’t end there, and you haven’t even heard my favorite part.

The following November, with more mouths to feed and many sick among them, food, again became scarce. As the food depleted, the Pilgrims continued to share with those around them, to the point that they were rationed to a measly five kernels of corn per day. Can you even imagine that? Five kernels of corn a day!

In the years to come, the Pilgrims would place five kernels of corn on their plates at Thanksgiving, to remind them of the faithfulness of God through that second severe winter. They kept their focus firmly on God and on the giving of thanks.

We, too, have endured a couple years of severity. There is no question about it. Have we been able to keep our focus on God? Have we continued to be thankful through it all?

1 Thessalonians 5:18 teaches us; In everything give thanks; for this is the will of God in Christ Jesus for you.

It is God’s will for us to be continually thankful, not only on Thanksgiving Day, but also the day after and every day that follows.

This Thanksgiving weekend lets lay aside all the way this holiday has become secularized. Let’s look back and remember the origins of this wonderful day. Let’s bear in mind all the things God has done for us, where He has brought us from, and what He has brought us through. Let’s remember to be thankful in the good times and the bad. We can always find something to be thankful for. Even if it is simply that we have more than five kernels of corn to eat today.

We as the Body of Christ, are called to a more authentic and passionate expression of thanksgiving. We are called to remember all the good things God has done and to give thanks for them, today and every day.

May we remember not only the good things God has done for us. May we also remember it is He who provided the turkeys, the potatoes, the cranberries, and everything we enjoyed on Thanksgiving Day. It is God who gave us the family that sat joyfully around our table. He is the creator all of things and He has given us all things richly to enjoy. For that, today, tomorrow and every day after, may we give thanks! May this day be an expression of our thanks to a loving, faithful Father.