Today I was thinking about a text I once received from a friend. If I recall the story correctly, she had been at a meeting and heard a minister talking about when Isaac sowed in the land of famine. You probably know the scriptures I am speaking of it is found in Genesis 26:12-14.

Then Isaac sowed in that land and reaped in the same year a hundredfold; and the Lord blessed him. The man began to prosper and continued prospering until he became very prosperous; for he had possessions of flocks and possessions of herds and a great number of servants. So, the Philistines envied him.

The word famine, though not often spoken of late, is beginning to be heard in our nation. Our economy can be compared to exactly what was happening in Isaac’s day. Famine in the land. God was not concerned about famine in Isaac’s day, and He is not concerned about famine today. He has a way to prosper, even when all the conditions are seemingly against it.

The world says, “Recession is coming, gather food and money and store it up.” While I am certainly not saying it is wrong to have staples set aside for emergencies, we must not do it in fear, but we must trust God and His ways. Not everyone can gather food and store it up, but we can all do what the Word of God says. God says, “famine is here, sow.” We may only be able to sow small but we can all sow a seed toward our harvest of abundance.

If you have been a believer very long you already know that God’s ways are usually the exact opposite of the world’s ways – and His ways always work if we obey them.

God said to Isaac… “Don’t be afraid and don’t run to another land, just sow and I will bless you.” Isaac obeyed God, the Bible says he sowed in the land of famine and reaped a hundred-fold return that same year. However, the Bible doesn’t stop there – not only did he reap a hundred-fold in that same year…the prosperity continued growing…until he became very wealthy and had so many possession that the Philistines were jealous of him and his wealth. That, my friend, is what God can do and desires to do for His people during times of famine. Famine doesn’t move God and it doesn’t change His principles. 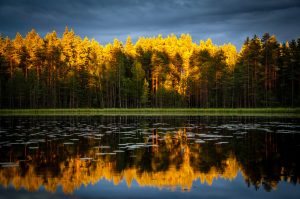 The statement I heard from my friend was about this very scripture. The minister said, “Isaac’s seed spoke directly to the famine declaring, ‘you are not going to be here long.”‘

There are two ways to handle the threat of famine or lack. One is to hoard up and hope for the best. This is usually done in fear. The other is to do as the Word says and sow in famine. Put your seed in the ground and let it speak to the lack or famine in your life – let your seed declare, “famine, you are not welcome here. God has declared me blessed, He says everything I touch prospers, therefore my seed is prospering and producing a hundred-fold return. But it won’t stop there, my seed will keep producing until I am very prosperous, to the point that those around me are jealous, just as they were with Isaac. Now, speak seed – speak to famine.”

Yesterday, my sister shared a story with me, a true story, about her church. She said during the covid pandemic, offerings were way down. Their church supported several ministries. One day they had a meeting to discuss what the best way forward was. One leader said they needed to stop sending 10% of their tithe to these ministries. Another man spoke up and said, “I believe instead of sending out ten percent, we should increase it to twelve percent.” They agreed to increase what they gave. Immediately money began to come into their church from numerous places. That, my friend, is how God’s people handle things. We don’t run in fear – we obey His Word – even during famine and lack, knowing it will not return void, but will absolutely produce what it was sent to produce.

It is only in giving that we receive. It is only in sowing that we reap a harvest, there is no other way. If seed is not planted there will be no harvest. If you find yourself in famine today, be encouraged, there is a way out…sow your seed and let it declare your abundant harvest is on the way!