For those of you who don’t know…Pearls are timely words God gives that we feel an urgency to share with our readers….

Something is going on with the number 52. It started with me last week.

I was working on a project and the Lord said ‘do enough for 52 weeks.’ Therefore I worked on that project all day long without counting how many I had done. Later when I counted them I discovered I had 52. I knew it was the Lord and that the project was ready for step 2.

Then I received the email with the prophecy with the number 52 in it…you may recall it from the motivation; The Lord spoke to me and told me that this new season many are stepping into is a season that will last 52 weeks. These 52 weeks sum up for a total of 365 days. The Lord immediately said 5 loaves and 2 fish. When I joined the two numbers, that is the number 52. Immediately I started weeping in God’s presence. I knew many would be touched by this blog and would begin to weep as the anointing of multiplication invaded their lives. That’s why as you read this right now you feel the anointing. There is such a heavy glory as I am writing this. The atmosphere of glory is here. There is a cloud of glory where I know the Lord and I see Him. I feel Him. All you have to do is lift your hands and surrender to the Spirit and give Him honor and glory.’ Rene Picota

Last night I received an email from a friend telling me there was a word at her church that said…. There were walls being built – high walls around our churches and our homes and there were angels dispersing bricks and mortar to re-build what had been torn down by the enemy. And these walls were walls of safety and preservation. On the walls were the words “I Am a Wall”. And we, his bride, declared that we are walls- because as walls – we are foundations for the Lord to build on. He said this is based on the book of Nehemiah where he was able to rebuild the walls in FIFTY TWO weeks – He was able to do in 52 DAYS what the Israelites had not been able to do for one hundred years……. Then, when my pastor got up to speak, he shared how his dad did not get saved and come to life – really start living until he was 52. I knew God was speaking something about 52!

Now, if that’s not enough to convince me, I turn 52 years old this very month!
God is saying something friends. Today Kelita also shared with me what Wikipedia says about the number 52; It is an untouchable number, since it is never the sum of proper divisors of any number.

As I said, God is speaking, I believe He is saying we have entered into a New Year, a New Time, a time where His people who are faithfully seeking Him will become untouchable and will be able to accomplish more in 52 days/weeks than it would take most people 100 years to accomplish.

I feel an urgency in my spirit today to share this word with you and to ask you to step into this New Year, this New Season by faith. Don’t miss this time in God. Don’t miss this season. I know you may have been disappointed in the past, but cast your faith into the deep ONE more time…believe we are in a New Season, a New Year and that it is going to be an awesome one. Let your faith arise as you read this and declare ‘This is for ME God, I declare I am entering into a New Season, a New Year and it will be 52 weeks of blessing and favor like I have never known in my life! I cast my faith into the deep this day and expect to bring in a haul!’ I am in total agreement with you and declaring this over each of you this day! Praise the Lord!

We bless you with breakthrough…

Hello, I want to share a song with all of my friends

( For those of you who are not familiar with Pearls...these 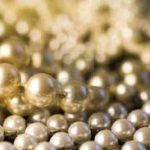 Pearls ( For those of you who are not familiar with Pearl

From the heart of Kim….

Something has been on my mind for this entire week, I feel c

For those of you who don't know...a Pearl is a timely word f

For those of you who don't know...a Pearl is a timely word G