The Blessing of Obedience

Today I want to talk with you about something that has been on my mind for several days. I want to show you some things that God has been showing me about the blessings of obedience.

First let me say, it’s important that we never feel that there is a particular formula necessary to seeing the hand of God move in our life. It’s important that we don’t think we can pick out one instance in the Bible, do the same thing, and God will react the same way. It simply doesn’t work that way. God tells different people to do different things, we see this throughout the Bible, therefore we must be careful to listen for His voice for our particular situation.

I want to share a few different instances with you from the Bible. First of all, do you remember in 2 Kings 5, when the man went to the prophet for healing? The prophet didn’t even come out to speak to him and this angered the man for he was a man of importance. Instead the prophet of God told his servant to tell him to dip in the river Jordan seven times. Because of pride, the man almost didn’t get healed – however his servant urged him to obey the prophet of God and dip in the Jordan seven times – as he did, he was made whole.

Was there healing waters in the Jordan River? No, of course not, if there was, thousands of people would be flocking to the river. The blessing of healing came by his obedience to do what the prophet of God had told him to do. As he obeyed, healing and wholeness came.

Now, let’s take a look at the widow woman who gave Elijah her last meal. If you recall, she was completely out of food and there was famine in the land. She told Elijah that she was going to make her last meal and die. Yet when the word of the Lord came to the prophet, he instructed her to give him her last meal and he told her that when she did, she would have enough to sustain her until the famine was over. She obeyed the prophet of God and it was just as the prophet said, her flour did not run out during the entire famine. There was no magic in her flour bin – her obedience brought forth the blessing of God and that blessing kept her in food the entire time of the famine.

Over and over we see this throughout the Bible, God would tell his people to do something odd or even outrageous and through their simple obedience, the blessing of God would touch their lives.

Most of the time it made no sense, there is no reason dipping in the river would bring healing. It makes no sense to give away your last meal to enable you to eat during famine. Who in their right mind would think you could hit a rock and water would come out? We see God telling people to march around a wall and shout and walls come down, how does that happen? Or to stretch forth a rod and the Red Sea will part, you must be kidding! Yet over and over we find people obeying God and His hand moving on their behalf.

In my walk with God He has told me to do some odd things, but as I obeyed, He has always blessed me. The blessing comes AFTER the obedience. Obedience precedes blessing. All these instances in the Bible that I have shared with you are pretty odd – God led them to do odd things but every time He did what He said He would do. What God tells us to do doesn’t always make sense, that’s for certain, and usually you can’t reason it out – but if you would just obey – His blessing will follow. So…what has He told you to do? Has He told you to do something you don’t think you can do? Does it make no sense to you? Then it is probably God – and as you obey, His blessing will follow…it always follows obedience. 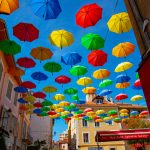