What Voice Do You Hear? 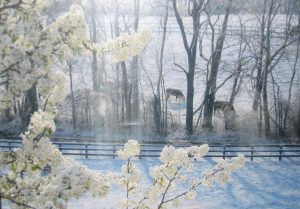 I awoke to the sound of rain hitting against my window. My plan had been to go to work early and catch up some things, however, my mind went to a conversation I had with my Mom the night before.

She had informed me the news said we would have rain that day and the temperatures would drop so there would be a chance of sleet and ice.

I went out onto my front porch and checked for ice, there wasn’t any. However, the thought remained in my mind, going over and over, ‘what if you head to the office and hit black ice or what if there is ice on the road and you just don’t know it yet?’ All these thoughts were going through my mind as I was getting dressed. They were not peace filled thoughts.

I had felt strongly the day before that this should be my plan, arrive at work early and take care of several things before the week began. My mind was torn between what I knew I should do and the report I heard the night before.

Suddenly the Lord’s voice broke through and said, ‘the only reason you are struggling with this is because of what you heard, if you had not heard that report you would move forward.’ Peace came over me and I knew all was well.

Now, I am not saying to ignore wisdom, not at all. It is wisdom to check the weather in the winter to make sure all is well before you set out, that is not my point, my point is I was allowing a bad report to hinder me from what I knew I was supposed to do. What I had heard, even if it was not truth, was influencing me that day.

In Mark 4:24 Jesus said, be careful what you hear.

Isaiah 53 says ‘whose report will you believe?’

I believe sometimes we allow an evil report to override what the word of the living God says.

You see, I had already prayed and felt I should go forward, therefore I had to rely on the report of the Lord.

His report says; Be anxious for nothing, but in everything by prayer and supplication, with thanksgiving, let your requests be made known to God; and the peace of God, which surpasses all understanding, will guard your hearts and minds through Christ Jesus. Phil 4:6-7

His report says; For God has not given us a spirit of fear, but of power and of love and of a sound mind. 2 Timothy 1:7

His report says; Have I not commanded you? Be strong and of good courage; do not be afraid, nor be dismayed, for the Lord your God is with you wherever you go. Joshua 1:9

Have you ever done that? Felt God was leading you a certain direction, but then hear a report and decide…maybe I am wrong, maybe I missed it? I think we all have.

The Bible says His sheep know His voice and the voice of a stranger they will not follow. Thank God for that!

I am reminded of the twelve spies, ten of whom brought back a back report, God called it an evil report. Because they heeded that report, they didn’t enter their promised land. How sad is that?

Don’t allow evil reports to stop you from moving forward in God. Seek His face, listen for His voice and follow that voice. There is safety there. There is provision there. There is healing there. In Him and Him alone is everything you have need of. Follow Him. Follow His voice.

Ask God for revelation for your situation and then meditate on the word of God.